Movie Thoughts: Across the Universe 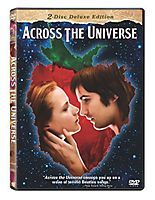 Across the Universe (Two-Disc Special Edition)
‘Across the Universe’ seemed perfect for me.  Director Julie Taymor also directed ‘Titus’, one of the most amazing movies based on a Shakespeare play.  It is filled with Beatles music, my favorite band of all time.  Plus, Eddie Izzard makes a quick cameo for ‘The Benefit of Mr Kite’.  Well, turns out it was not meant to be.  Everything I had heard about the movie, all the clips I had seen in the trailer, all of the emotion those thirty seconds of film showed me…I think I imagined a better film.  I didn’t care about any of the characters.  The story was very flimsy and cliche.  Most of the time, the songs did nothing to move the plot forward.  Other times you could imagine a room full of Beatles’ fans saying “oooh, there’s that song ‘Dear Prudence’, we should have a character named Prudence and then they can sing that to her!’.  And the images on the screen?  The underwater sequence, mr kite, and strawberry fields were very trippy, but the rest of the movie?  Kind of boring.  Everyone was very pretty.  The singing was nice, but they didn’t really do anything interesting with the songs, just sang then relatively straightforward.  I almost wish they hadn’t tried to hard to make a story.  I think it would have been far more interesting to just do a bunch of short films, little music videos, perhaps linking them together in the sense that they all take place in the 60s or something.  But the movie itself left a lot to be desired.  In the end, it just made me want to drag out my Beatles albums and re-watch the Anthology DVDs for images of REAL people in the 60s.

Got my physical @officialpax_ badge to add to my collection. Hopefully I can add a PAX U badge to the mix soon !