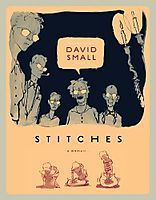 Stitches: A Memoir
David Small
If the artwork on the cover of Stitches seems familiar to you, it’s probably because you’ve seen David Small’s illustrations in such classic children’s picture books – like Imogene’s Antlers.  But Stitches is not for kids… Imagine you are 11 years old.  Imagine you go into the doctor’s office, thinking you’re just going to have a growth removed from your neck.  When you wake up, half of your vocal chords have been removed, along with your thyroid and the only sound you can make is a pathetic “Ack” noise.  This happened to David Small when he was growing up, and this event, along with the general dysfunctional-ness of his family, is the story he tells us in Stitches, a memoir told in graphic novel format. This format works perfectly for his story – The book opens with all the way the family “speaks” to each otherwithout actually saying anything – his mother slams the cupboard doorsshut in the kitchen while cleaning up, his brother bangs on his drumset – the images explain it all, text is unnecessary. David is a shy child,  too shy speak up and the wordless panels reflect this solitude.  He lives in his head, with the cartoons he draws, the characters he reads about.  His main way of getting attention from family was to let himself get sick so his parents  would take care of him.  When the operation occurs and he loses the ability to speak, the wordless panels take on a sense of frustration because now there are so many things he wants to say. The story of the operation is just a small part of Small’s memoir, though this event effects the rest of his life.  Growing up in the 1950s, you just didn’t talk about certain things, and the poor kid stumbles through life, discovering things at all the wrong times. Small’s art is simple and expressive.  It’s as though he has been working all these years on children’s books to hone his skill enough to create this book.  Considering what he has become today, the book is both disturbing and inspiring.  5 out of 5 stars, best graphic novel I have read all year.