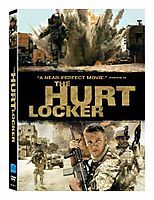 The Hurt Locker
Wow.  So, I doubt there is anything I can say about this film that you have not already heard.
It’s gripping, well acted, well filmed, the editing is fantastic and it will stick with you.
Movies about the war in Iraq (or whatever it is called at this point) always seem to effect me more than I expect.  I think it’s because I can’t even fathom that environment.  I mean, we’ve all seen World War II movies with soldiers wandering Europe, but I get that landscape, that world.  The only new thing for me is the war.  But when it comes to the Middle East, it’s all so different.  The desert, the people…it’s just foreign.
I think that’s what makes ‘The Hurt Locker’ so mesmerizing to me.  The idea that these people live in a land where bombs are just left in the street blows my mind.  That these men risk their lives every day over there to protect so many.  It’s their job.
‘The Hurt Locker’ is not a documentary though, it’s a movie about a team of men and the way the war alters them.  I know that sounds cliche…but this movie is just so well done, you forget about that theme and just focus on the screen.  It would have been so easy to just despise the main character, but somehow I understood his choice in the end.
“The Hurt Locker” is an intense and well-crafted film that ranks up there as one of the best war movies I have ever seen.