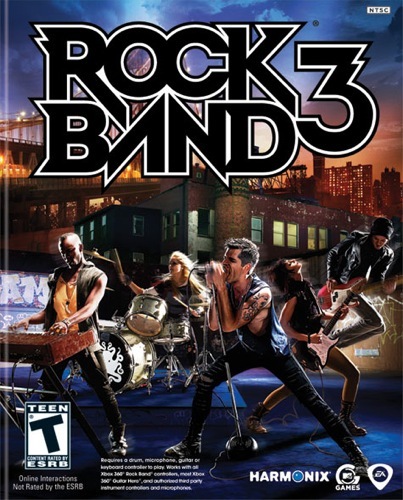 Rock Band 3 was released a couple weeks ago.  Being a Rock Band junkie, I pre-ordered it a month earlier from Gamestop to get the 3 extra songs.  I really didn’t know what to expect though I was looking forward to trying out the keyboard and very curious abou the addition of pro-mode.  But the game that I have been playing for the past two weeks is a lot more than I expected.

Harmonix heard our cries and the new game modes are perfect for parties and playing with friends.  Everything is based on “Challenges” now, which can range from something you can play in single-player mode to full band.  There are the Road Challenges, which replace the Tour Mode of the previous games.  Like Tour Mode, you play certain venues, earn fans, and attempt to collect enough fame to move on to the next set of challenges.  But the songs you play in each challenge take into account your purchases and replay value.  Instead of being stuck with “Eye of the Tiger” over and over, you get your one assigned setlist along with two setlists that pick and choose from you song catalog.  But these setlists are broken down by genre or year, giving you more of an idea what to expect.  When you go to the screen to choose your instruments, the difficulty is displayed along with the names of the songs you will play, giving you a chance to choose wisely.  But don’t panic, if you midjudged you skill level, you can now change difficulty while playing!  And if you get stuck on a song and know you cannot beat it, the band can vote to just continue without getting any points but at least having the satisfaction of finishing the track.

Scoring for Road Challenges are different too.  Before each setlist starts, a note appears on the screen telling players how to earn “Spades”, which you need to unlock additional areas of the game.  This can range from accuracy to multiple uses of Overdrive.  So don’t ignore those screens (like I did) or you’ll be confused about why your score is so lousy after the song!

I have seen Pro-Mode only for drums.  My friend has a crazy drum set with two cymbals.  He rocked out on pro expert mode with no problems.  Rock Band will ask how many cymbals you have set up and then use that to create the pro drums.  For cymbals, the symbol on the screen will be a circle instead of the usual bar.  Once you train your brain to recognize that, you can rock and roll like a star.

I’ve done a few of the training levels for the pro-mode keyboard.  It takes you through some basic scales and trains you on intervals, all the while offering music theory, if you bother to read the notes in the corner.  I took piano when I was a kid, so I sorta just want to see the notes at this point, but I think for someone who had never touched a keyboard, this might help give them some confidence.  I’m having trouble figuring out how far apart the keys are.  I’m thinking if I play in the regular Rock Band mode, I will get the feel for the distance between keys and it will make the pro-mode easier.

And don’t worry if the songs you picked don’t have keyboard parts, you can also play the keys as a guitar or bass.

Dropping In/Out of gameplay and switching instruments is less of a hassle now too.  I was able to drop-out of guitar and then switch to keyboard all within the game, no signing out of xbox live.  This will be a big deal for parties, along with the addition of the vocal harmonies like Beatles Rock Band.

The character creator has a lot more to choose from and you could spend a lot of time tweaking and refining your Rocker if you wanted to.  And almost every big you play unlocks some new outfits and accessories.  I think you’ll be hard pressed to find two Rock Band 3 avatars that look exactly the same.

Rock Band 3 is a solid addition to the music game series.  I was really impressed by how different this game was but I think all the changes and tweaks were exactly what was needed to make it a worthy purchase.  The song list is a bit odd as they attempted to work in rock tunes with decent piano, but on release week they gave us 3 free Doors songs and looking ahead (Billy Joel track pack anyone?) there will be plenty more tune-age to choose from.  And when you export your Rock Band 1 & 2 songs along with the Lego Rock Band setlist AND include all your downloaded songs (over 2000+ to pick from), you’ve got a game that will keep you and your friends (and maybe your nieghbors) rocking all night long.