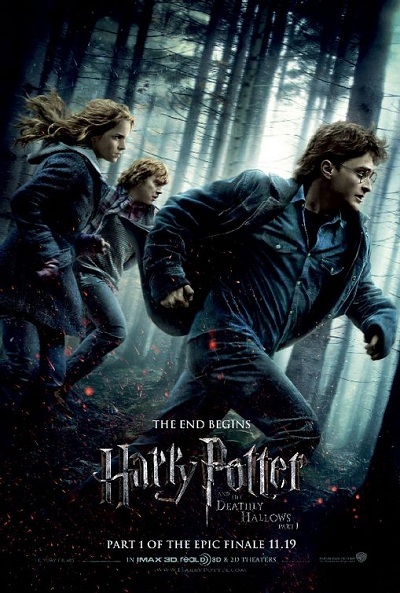 Let me just come right out and say it – book 7 in the Harry Potter series is my least favorite book in the set.  I was very disappointed in some of the choices Rowling made when putting together the end of this epic series, a series that had started out as a book for Children, but had grown and evolved through the years to a worldwide phenomenon.  But I had to see the movie because there is nothing more fun than a midnight showing of Harry Potter, especially at the historic Senator Theatre in Baltimore.  It’s just you and 799 other fans who will laugh, cheer, and even cry together for one night.

I was very impressed by Part 1.  It reminded me of my favorite Harry Potter movie, The Prisoner of Azkaban.  Where films 4-6 tried to copy the look but not the feel, I felt that director David Yates finally got the hang of it with this movie.  Maybe it’s because it is the end, because the story is so bleak.  This is like The Two Towers or Empire Strikes Back – it’s the center of the story where no one really wins and that darkness is hard to look away from.  There is no resolution, just a moment of despair and then credits and a date on my 2011 calendar.

Of all the Harry Potter films, this is the one I would caution parents of young children about – it is very mature in the storytelling and visuals.  There is torture and murder within the first 20 minutes.  One review I read said it was the most “sensual” of the films, and it’s hard to deny that these characters are truly young adults and they have feelings for each other that have developed over their 7 years of going to school together.  Also, if you had some how missed that Voldemort’s followers were Nazis, the movie makes it abundantly clear – the Ministry prints out “Dangers of Mudbloods” propaganda, the guards are dressed like Nazi officers, and one of the characters even ends up in a leather jacket similar to that of an SS officer.  (Though I wonder how many of the younger American viewers picked up on this…I know I’m a bit of history fan and after watching an episode of Doctor Who last month which touched upon World War I, I’ve been a bit hypersensitive to noticing this stuff in films and television.  But would today’s 12 year old get that same bit of recognition?  It wasn’t exactly subtle but perhaps Yates chose to do that to reach kids that have only seen pictures of Nazis in textbooks or Indiana Jones movies.)

ANYWAY – the acting.  After being surrounded for years by famous British actors, I think Radcliffe, Watson, and Grint have managed to pick up a few tricks of their own.  They really get to carry this movie, since they are not confined to Hogwarts.  It was nice to see them out and about in the real world and not draped in black cloaks.  The scenes in the forest, chapters in the book that made me want to scream, were more tolerable when watching these three act them out.  I felt the One Ring locket issue went on too long in the book but Hermione figures it out quickly on screen and then we can see who is wearing it at any moment (though the editing for this sequence could have been a bit better – it felt like Ron ended up with the necklace more than anyone else).

On a fandom sidenote – Harry/Ginny still feels very forced to me on film, but anytime I see Luna talking with Harry, I feel a lot more chemistry.  Just my opinion, but I think they make a much more logical couple.  I always felt like Rowling just pushed Ginny into a romance with him because she had decided to pair up Hermione to Ron.  But Luna is an old soul, just like Harry, and I think it comes through on film even more.  But perhaps that’s just me.

THE SHORT VERSION (too late!):

HP7,Pt1 – It’s darker, grittier, and more sensual than any of the other movies up to this point.  WIth a running time of 2 hours and 30 minutes, it probalby could have been tighter in some places but Yates keeps the action going for as long as he can, and when things slow down, the film is so beautiful to watch that you don’t mind a little bit of Harry moping over his parent’s grave.  But, like all “middle” films, it’s hard to judge it without the grand finale.  I hope Yates can keep the story moving forward when we come back to the Deathly Hallows in 2011.