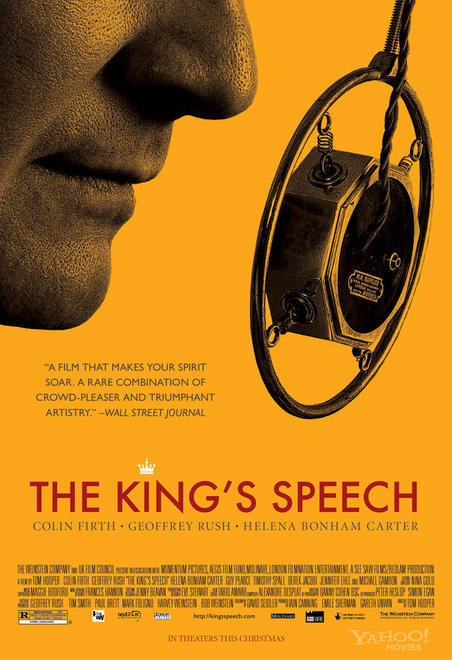 Not too many uplifting films end with the first days of World War II, yet the dark cloud hanging over Europe is not the primary focus of “The King’s Speech”.  The larger than life figures of Hitler, Stalin, and Churchill are barely mentioned.  Instead, the story focuses on the shy prince who only wanted to stay in his brother’s shadow, but was instead forced into the public eye.  A man who stammered in his speech because he had been raised to be unsure of himself, which went against everything a royal child should be.  And the story of another man from another land who helps this very British prince find his voice.

Colin Firth may have won the Golden Globe (and deserved it 100%) but the thing that makes “The King’s Speech” so watchable is the entire cast.  Helena Bonham-Carter as Elizabeth, Albert’s wife, a strong woman in her own right who worked hard to support her husband.  Geoffery Rush as Lionel Logue, the speech therapist who knows there is more to the stammer than just a “mechanical problem”.  And even the true supporting actors who play minor parts but major roles in the lives of Albert and Lionel.  This entire group, along with some beautiful direction, keeps the viewer engaged in an historical drama that, according to Colin Firth, even the British citizens know very little about to this day.

I’ve seen the movie twice now and can safely say this is a five-star movie, with everything coming together in perfectly.  Whether you see it on the big screen in a full theater (and both showings I’ve been to have been full) or wait to rent it and watch it at hope, you’re going to cheer for Bertie and Lionel.

Finally learned to play Under Falling Skies by @czech_games_edition tonight! Aliens took over both times but it was a lot of fun! I’m not quite ready for campaign mode yet, I’d like to survive at least one attack on easy mode. #boardgames #sologames