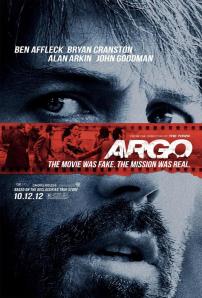 You know a book or a movie that is based a true story is good when it gets you on the edge of your seat.  ‘Argo’ does this and more.

I was not very familiar with this piece of history.  I vaguely knew about the hostage situation but I had never heard about the six Americans that fled the embassy and holed up in the Canadian ambassador’s house.  Or the CIA operation to bring them home alive.  And maybe you don’t know much about it either so that is all I am going to say about the plot.  I went in to the film knowing less than this and I it was so enjoyable to see a movie I knew nothing about.

Ben Affleck has matured into a fantastic director and a great actor.  The cast he assembled for this film just knocks it out of the park.  The script is perfectly balanced — if the story had been all tension with no let-up I don’t think it would be nearly as engaging as it was.  The movie has you biting your nails at one moment and then you’re giggling and then you’re gripping your arm rest…

I was also relieved that the scriptwriter didn’t pull any punches.  They break down the cause of the unrest in Iran right in the beginning and it’s clear the US made some big mistakes.  The movie isn’t about apologizing for those mistakes or spinning the facts, it just presents them to help give viewers some context.

I am rooting for the entire cast and crew of ‘Argo’ – it deserves the Oscar nod.  This is a great piece of dramatized American, Canadian and Iranian history.

Short Version: GO SEE ARGO NOW!  It’s worth seeing in the theater, if only to give you the same claustrophobic feeling the hidden embassy employees must have felt.