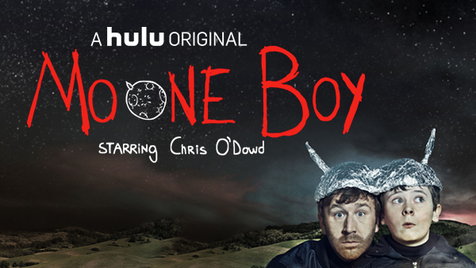 I am a big fan of The IT Crowd so it’s hard for me to resist Chris O’Dowd’s Irish accent and scruffy yet adorable face. When I heard about Moone Boy, his new comedy program loosely based on his childhood in Ireland, I had to give it a go.

Dowd and I are close to the same age and though I am not Irish, I do have some Irish in my background and I was raised Catholic. Plus, the trials and tribulations of childhood all seem to be the same, no matter where or when you’re from. It was easy to relate to the story of little Martin Moone and his working-class family. O’Dowd also appears in each episode as Martin’s imaginary best friend, who cheers him on.

It’s a very cute and sweet show. My favorite episode so far is Godfellas, which focuses on Martin’s turn as an altar boy. There’s actually a few moments where you can see David Rawle, who plays Martin, cracking up as O’Dowd coaches him on his altar boy skills. It’s funny because it almost feels like a family sitcom from the 1980s, it has that sort of Cosby Show/Family Ties/Roseanne vibe to it.

I hope this isn’t the last we see of Moone Boy or O’Dowd as a writer. And I really hope that we see more of David Rawle, who is doing a dead on Chris O’Dowd impression.

Warning: If you’re like me, after watching the show, you will walk around talking with a bad Irish accent for at least 20 minutes. Unless you’re actually Irish…you probably just talk normal then…anyway…

You can watch episodes of Moone Boy right now on Hulu.com