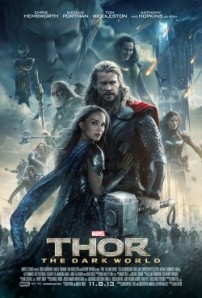 On a whim this afternoon I decided I would go see Thor: The Dark World. I had heard relatively positive reviews and had liked the first movie okay, but really I think I just wanted an excuse to eat a bucket of popcorn and get away for a couple of hours.

It did the trick.

It’s a ridiculous superhero movie but it has a lot of heart and humor and it flies by, even at the 111 minute mark. While I felt that the first movie had a lot of moments that dragged, this one never felt that way, with plenty of action and just enough of a plot to make it interesting. I somehow managed to avoid spoilers, maybe because I don’t watch as much live TV as I used to, so I wasn’t inundated with commercials.

The script and directing were done right, along with the editing, keeping fight sequences interesting even though you can really only do so much when it comes to giant not-quite-immortals beating the crap out of each other. But there was enough going on with the characters to make these sequences work.

I think the cast of this movie really elevates it beyond what it could have been. Hemsworth IS Thor and when you put him in a room with Anthony Hopkins, he manages to hold his own. Tom Hiddleston manages to steal every scene he is in and I didn’t really mind. Chris Eccleston and Idris Elba were strong supporting cast and even though they didn’t have a ton of screen time, it’s like their mere presence in the movie made it better. While I still feel Natalie Portman and Chris Hemsworth do not have the on-screen chemistry of other Marvel couples (Paltrow and Downey Jr. for example) I felt that their attraction was a bit more believable in this one. Kat Dennings is back as Darcy and she cracks me up for some reason so I didn’t mind seeing her again. Stellan Skarsgard is always awesome. And it was a surprise to see Chris O’Dowd and Zachary Levi!!! It made my little fangirl heart extra happy (even if Levi looks very silly with blonde hair and I spent the whole movie going ‘wait…he wasn’t in the first film…was he???’ (he wasn’t – Fandral was originally played by Josh “Charming” Dallas))

Speaking of being slightly distracted by geeky things, I think the overwhelming popularity of fantasy and science fiction films may have rotted my brain. During the opening battle when Thor first appears, all I could think was “He’s fighting Dovakin in Skyrim!” because *EVERYONE* had a silly hat with horns or some other armor that looks like it was forged by a leathercrafter trying to level up. Then there was the scene in Asgard, looking out on the lake, which was a bit too close to the scene in Attack of the Clones when Anakin and Padme are “hiding” on Naboo. And another **spoilery** scene in the movie gave me Revenge of the Sith flashbacks…with a dash of Tangled thrown in. Seriously, it felt like Disney was just raiding all the saved files from previous movies!

But apart from those moments, I was totally absorbed by this movie and I really enjoyed it. Of course, we are set up for another sequel, because Marvel is going to milk this cash cow for as long as it can, but even with that slight bit of a loose end left out there, this movie ranks high for me in the Marvel superhero list.