May the 4th be with You. 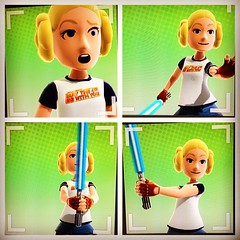 So, the only thing I did Star Wars related today was post a few photos on Instagram of my Star Wars toys. Honestly, I know those movies so well, I can just close my eyes and watch them in my head LOL.

Star Wars has long been a part of the Definition of Me. I watched the movies non-stop when I was a kid. I have fond memories of putting in the VHS of Return of the Jedi, sitting through the entire Jabba’s Palace sequence, then after the gang escaped Tattooine, running into my toy room to grab my box of Star Wars figures and dragging them out to play with in front of the TV while the “boring” parts of the movie went on (oh you know what I mean, all the talking bits and the sad bits). I think my favorite toy was probably the Rancor because his mouth opened and closed, rawr rawr rawr. Usually I would spend a lot of time setting up all the figures, then the shuttle would land on Endor and I would be back into movie watching.

As I got older, Star Wars was always there but it floated into the background until the early 90s. I signed up for the Lucasfilm Fan Club. I think this was actually a result of Young Indiana Jones Chronicles merchandise that I picked up at a school book fair. Getting that magazine reminded me how much I loved those movies and sent me into obsession mode. My middle school folders and notebooks were COVERED in Star Wars doodles. I know my blue folder for social studies had the ENTIRE main cast list written out on the front. And around this same time the Timothy Zahn novels were published and I was sucked back into the universe.

I’ve never been too deep into the online fandom but I do attend meetings with the DCSWCC, a awesome group of folks that love the movies, for better or for worse. I may not watch the movies every year, but when someone asks me to name my favorite thing, Star Wars will always been on that list.

For me Star Wars is like that teddy bear you’ve had since you were born. You don’t remember who gave it to you. You may know because you have been told, but otherwise it has always been a part of your life. And when times get tough or you’re feeling a little out of it, just holding it close gives you a calm feeling. Rewatching Star Wars just makes me happy. The original trilogy is so closely linked to everything in my life, I just feel at home in front of the TV watching Luke, Han, and Leia run around fighting baddies.

So tonight I raise a glass to the original trilogy, the classic movies that started this whole crazy franchise. You made me the geek girl I am today, and for that, I say thank you. 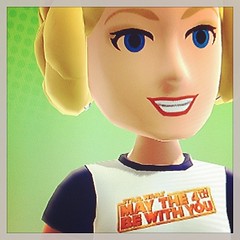