It has come to my attention (thanks to dunc) that today is the 15th anniversary of the release of The Phantom Menace. 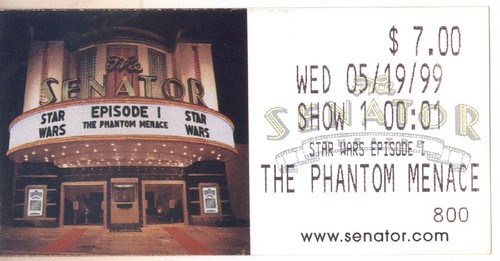 I guess that is right. That means it’s been 15 years since I graduated high school. Freaky.

Though, for me, the movie premiere was only a small part of the experience. Most of my TPM memories are from a week before, on May 11, when my friends and I camped out for midnight premiere tickets for Baltimore’s historic Senator Theater. The Senator is an old movie house with one BIG screen, THX certified sound and only 800 seats. If you wanted to see the midnight show, you had to set up camp. 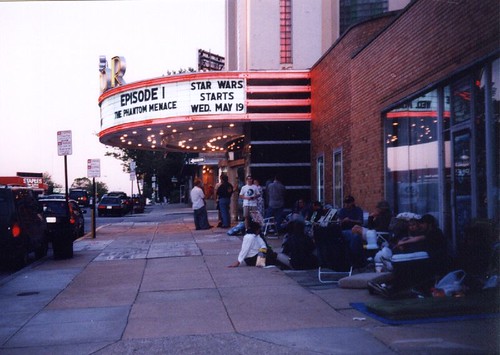 We were 180th in line, this was not our main view. We were actually on the front lawn of a dentist’s office. No one really seemed to care though. I think a movie with this sort of following only comes around every few years so I’m sure they hadn’t had crazy teenagers sleeping on the sidewalk before. My parents let me skip school for the occasion (which, me being a total straight laced nerd was a BIG deal). This was MY senior skip day. And night. And then a little bit of day again.

This was all pre-WiFi and Smartphone, mind you. I had my cell phone for emergencies but that was all I used it for. We had to use the bathroom in the bar across the street and after that closed the gas station at the corner. The local news paid us a visit, I remember being elated to see footage of us all sitting around playing Star Wars Trivial Pursuit on the TV (I had told me mom we might be on the news and she managed to tape the 3 minutes segment for me).

I have to say, this has to be one of my favorite fandom memories. Being outside with all these other fellow Star Wars fans. In the morning we sent out search parties for food and the bagel shop down the road was smart enough to show up and hand out their menus so that was where we all went.

I don’t know if anyone camps out for movie tickets anymore. I know I haven’t done it since Revenge of the Sith. Now that you can order online, it takes some of the magic away. Though I can’t think of a movie I would need to see at midnight. I will see the next wave of Star Wars movies in the theater, but I doubt I will be excited enough to want to camp out.

Anyway, a week went by and we were back at the theater at midnight for the movie. While I was in the moment, in a theater of 800 crazy Star Wars fans who knew all the write moments to applaud, cheer, and laugh it was a fantastic time.

Afterwards, after I had left the glow of the theater, I found myself trying to make myself love the movie but knowing deep down that it had missed the mark. (I clearly remember the guy in front of us in line had Star Wars tattoos all over him and he had just had Darth Maul added to the collection. After the movie was over, I wondered how happy he was with the movie.) It was a confusing time. I just kept hoping that the next movie would make it all better.

What about you? Did you see Phantom Menace at midnight or on opening day? Do you remember your reaction? 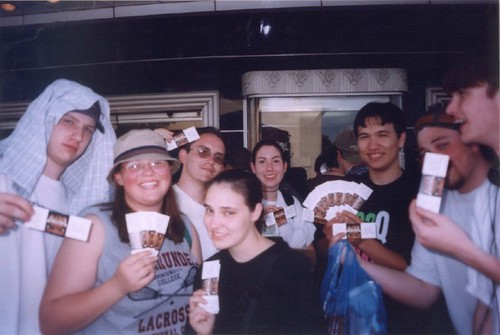