I can’t quite pin point the first time I ever heard Weird Al’s music. It was quickly assimilated into my childhood to a point that, like Star Wars, I barely remember a time without Weird Al.

I do remember when UHF was in the theaters. 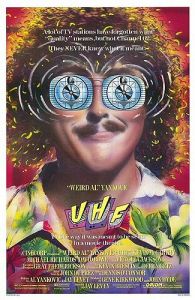 It was the summer of 1989. I was in Florida, staying with my grandparents and my aunt because my little brother was about to appear and my parents figured it would be easier if I was out of down when that madness went down. I saw a lot of movies that summer – Tim Burton’s Batman, Disney’s Honey I Shrunk the Kids (this was also the start of the GIANT SODA cups you could get at fast food restaurants which for some reason sticks in my mind).

ANYWAY I was the most excited about UHF. I loved Weird Al, I had a few of his albums on cassette and I listened to them on my boom box all summer. My clearest memory comes from this summer, using my boom box to record songs off of MTV to listen to later. I didn’t have any kind of sophisticated set up – I just held the device up to the speaker and hit record. I waited all day for the UHF video to finally play, my blank cassette primed and ready. When it finally started, it was so excited, I jumped up and shoved the boombox towars the TV…

…and managed to hit the power knob on the front, pushing it back in and turning off the TV.

On that old cassette, you can hear my voice still singing along go “oh…no!” and the shuffle as I try to get my hand between the speaker and me and the “THUNK….Fzzzzzzzz” as the TV turned back on and brought the station up.

It’s funny because I know I saw the movie in the theater, but this is the strongest memory I have of that summer.

And, of course, the movie has lived on in quotes for the rest of my life. I just did the Wheel of Fish sketch with my co-worker the other day, and I’m sure you could guess that Conan the Librarian holds a special place in my heart.