Going to try to make this a weekly post in 2015 since I watch a LOT of movies and tv shows and then forget to post about them. 🙂 This will give me a weekly schedule and hopefully encourage me to post more!

According to Letterboxd, I watched 76 “movies” in 2014. 43 of these were new-to-me movies and the rest were rewatches because sometimes you just need to go back and see if your favorite movie still holds up after all these years! 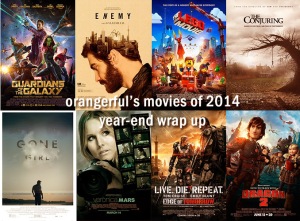 First Movie of 2014: The Princess Bride
I have seen this movie a countless amount of times, but when we heard it was going to be playing on the BIG SCREEN, we just had to go. Seeing it in a dark theater full of fans was so much fun. (and oddly enough, the first book I “finished” in 2015? As You Wish: Inconceivable Tales from the Making of ‘The Princess Bride’ – but more on that in another post!)

Last Movie of 2014: How To Train Your Dragon 2
I find it amusing they didn’t give this movie a subtitle or something because the dragon training is over! Hiccup and the citizens of Berk have come a LONG WAY since the first movie. Another fantastic entry in this fantasy series. The quality of the writing and the acting was superb.

Best Movies of 2014: The LEGO Movie and The Conjuring
I’m pretty stingy with my 5 star ratings, but both of these movies surprised me in how much I loved them!

When trailers for The LEGO Movie came out, I was skeptical, thinking this was just another movie for the sake of marketing (though as a Star Wars fan you’d think I would be cool with that). After all the rave reviews, I decided to take the DVD home and give it a shot and was shocked to find a smart, funny, movie that ranks up there with Toy Story when it comes to stories that hit me right in the feels. Plus, Chris Pratt was everyone’s boyfriend in 2014. EVERYONE’S! Guardians of the Galaxy wasn’t even a blip on my radar yet when I watched this movie, but even as a little yellow minifigure, Pratt’s charm is undeniable.

The Conjuring was a movie I had no intention of watching. I’m not into scary films and, again, I dismissed it immediately as a cheap horror flick that would probably be all about the gore. And again, word of mouth from friends told me that, yes, it was scary, but not just for the sake of being scary. It had a well written script, made all the more interested for being “based on a true story”, and an amazing cast that elevated the film. I was scared! But I couldn’t wait to watch it again. Except I can because I would be too scared to be alone at night if I watched it too much…but I think it might become Halloween viewing.

Worst Movie of 2014: C.O.G.
I don’t even know how this DVD ended up on my desk or why I thought we should watch it. I guess I was thinking a movie based on a David Sedaris story would be amusing. Turned out to be the most painful and unenjoyable film we saw all year. It doesn’t matter how many good actors you have around, a shitty script is shitty. We now use this movie as a frame of reference for how bad we think other movies are. (and Tim will not let me forget that I made him watch it with me).

Biggest Surprises of the Year: Guardians of the Galaxy
Come on, we all thought this was destined for mediocrity, like so many Marvel films before it. Except it was awesome. Again, Chris Pratt surprised us all. Star Lord’s scoundrelness won us over, it was like having Han Solo’s own movie (note to Disney: you DO NO need to make a Han Solo movie…you have it right here so please just … don’t).

Most Frustrating Movie of 2014: Enemy
Seriously. wtf. W.T.F. I thought two Jake Gyllenhaal’s would be better than one…I was so wrong.

Movie I Hated That Everyone Else Loved: Birdman
Yes the “acting” was great but for a movie lamenting how Hollywood is just making the same movie over and over with superheroes and how that isn’t REAL, I’d seen the story of the loser actor struggling to be REAL on stage enough times to be unimpressed.

Movie I thought I would Hate but ended up enjoying: Gone Girl
I only saw this because my friend wanted to see a movie and this was what was out. But I was on the edge of my seat the entire time. I doubt I would watch it again, because now that I know how it all ends, it won’t be as engaging, but for two hours, David Fincher had me on a string.

The Way Way Back — it’s just as good as everyone said, it feels like a YA novel I would read.

Spectacular Now — actually based on a YA novel I meant to read…but the movie was so good, I don’t know if I will bother. Shailene Woodley begins her reign as the YA adaptation queen.

Veronica Mars — I participated in the Kickstarter for this movie and was really excited when it all started…then I rewatched the TV Series and some of the shine wore off. But it was a cool experiment to be a part of. I got a digital copy with my kickstarter donation so we watched the movie on release day in my apartment.

Edge of Tomorrow — (or is it Live.Die.Repeat???) What? A Tom Cruise movie that didn’t totally suck!?! That I could actually watch over and over? Who would have guessed Hollywood had it in them! It’s like Groundhog Day but instead of trying to woo Andie McDowell, you want to KILL ALIENS!

This was the year Tim tried his best to get me into anime. We watched several movies and tv shows. Ninja Scroll and FLCL were probably the two I enjoyed the most (I later became hooked on ‘Attack on Titan’ which I LOVE LOVE LOVE)