Some nights after dinner, we open up the YouTube app on the Xbox and just start watching random stuff. Usually it’s clips from Jimmy Fallon or Conan O’Brien but a few weeks ago, we stumbled on a a channel with lots of “top ten” this and the videos that were amusing, even though some were a bit of a stretch since this was all the channel did. Then one of the Suggested Videos linked to a show called “OutsideXbox“. 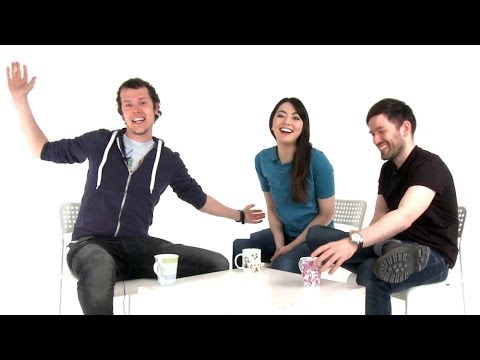 There are three of them – Jane, Mike, and Andy. They are gamers. They are British. They are darlings. I can’t stop watching the videos.

I think what I like most (apart from the fact that Jane is there representing the ladies) is that they are never really *mean* about things. Yes, they are snarky and poke fun at a lot of video game cliches, but the humor comes from a happy place. The show is about Xbox games but they don’t sit and take potshots at PC, PS4, or Wii games and frequently reference classic titles from these systems when doing their lists. I never feel like they are attacking anyone, just having a laugh. They can joke because they love the games too. We’ve all been there!

I am addicted to this channel. My gateway drug was all the silly lists of ridiculous things, like achievements and easter eggs. Then the other night, Tim clicked on them playing through a portion of the Slender game, and while I have never really been into watching other people play games, I think having the 3 of them in the room together made this SO much fun to experience. Instead of a gamer talking to themselves, we had the three of them laughing and jumping together (and Mike acting like he wasn’t scared but we know he was screaming internally the entire time).

To top it off, each Friday they post a “Show of the Week” wish some highlights and comment reactions from the videos uploaded during the week, which usually has another list and some antics in the studio.

So if you’re in need of a gamer show or think you might be (I didn’t even know I was until I started watching!) then give OutsideXbox a try!