Star Wars is about standing in line: The Force Awakens at The Senator Theatre

The internet is full of reviews for Star Wars: The Force Awakens right now, so I don’t feel the need to type up anything in-depth about that.  Instead, I wanted to talk about the experience, quite possibly the last time I am this excited about a movie ever again.

There is a movie theater in Baltimore, Maryland called The Senator Theatre.  It has been there since 1939.  I was not.  I was born in 1981, not in a galaxy far far away, but also not in Maryland. I didn’t see Star Wars in theaters (technically I saw Return of the Jedi but I wasn’t really old enough to appreciate it).  For me, the Star Wars Trilogy, my favorite movies of all time, had only existed on BETA cassettes, watched on my parents TV while playing with my action figures. I have no memory of the first time I saw Star Wars, the revelations about Luke and Vader and Leia were always known to me.

In 1997, Lucasfilm released the “Star Wars Special Edition” and I finally had a chance to see it on the big screen!  I’m really not sure why my parents chose The Senator – maybe it was the only movie theater in town showing Star Wars (the mind boggles) or maybe it was because they had a THX Certified Sound System.  Doesn’t really matter, because all I know was this experience was the start of a tradition.

In 1997, there was no online ticket ordering or advanced ticket sales. To see Star Wars at The Senator, we had to arrive early and stand in line. This was my first time experiencing this. I was a 16 year-old girl, a Star Wars fan (I had written the entire cast list on my history notebook because apparently knowing who played Admiral Piett was slightly more interesting than knowing about U.S. history…whoops) and I had always felt like I was the only one who really loved these movies.  Then I got to stand in line.

Star Wars fans and geeks in general love lines. There is a reason. When you find yourself standing in a line for a movie/book/video game or convention appearance, you know you have something in common with everyone there. Casual fans don’t stand in line, casual fans will get tickets later when the rest of us finally go home. I’m not trying to pull rank here, I’m just saying that you know you are on the same level as those around you. I remember my Mom striking up a conversation with the people in front of us in line, talking briefly about Star Wars and our family.  Nothing in depth, we didn’t become life long friends, but for that brief moment, we connected with random people. Then the ticket office opened, we paid our way and went in to find our seats and I got to experience Star Wars on the big screen. The crowd applauded when “Lucasfilm” came on the screen and then cheered when “STAR WARS” began to fly through space. I can remember hearing the Tie Fighters flying around my head, but not much else about that viewing experience.

But that bond that we formed, however brief, stayed with me long after the movie. When “The Phantom Menace” was announced, I knew I had to see it at The Senator. After much debate, Lucasfilm announced that they would allow advanced tickets sales for Episode I. On May 11, 1999, my parents let me skip school and I convinced a few of my friends to come with me to camp out for tickets.  My mom dropped us off outside the theater. We arrived “late” by Star Wars fan standards (we were 18! What did we know!) and the line had already wrapped around the corner of the theater and was down the street.  We ended up on some dentist’s front lawn.  I brought my Star Wars Trivial Pursuit game and we all waited.  We had blankets and snacks and we slept outside on the grass, in lawn chairs, or kept ourselves awake sitting on the sidewalk. I remember the local restaurants handing us their menus then coming back for orders. I remember the news showing up and filming us playing trivial pursuit. I remember a guy showing us his brand new tattoo, featuring Darth Maul. I remember watching the guy from the box office come out and count heads, passing us and then going down the line a bit more, only to tell everyone behind us that they wouldn’t be able to get tickets to the midnight showing because they were too far back in line. 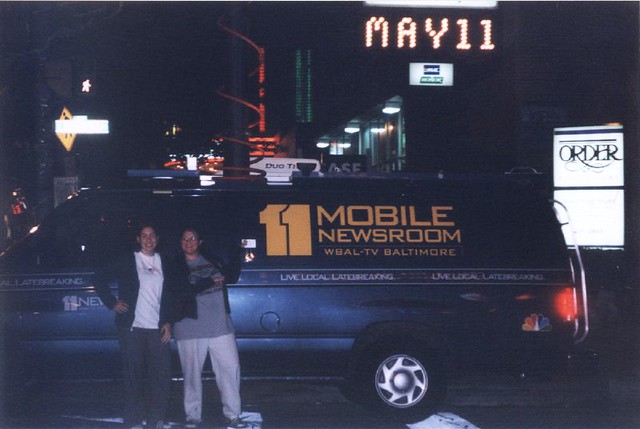 It was an amazing experience. I think remember more about that night in line than I do about seeing the movie for the first time. My friends thought I was crazy but they also loved the experience because there is no other movie that you would do this for. NONE. 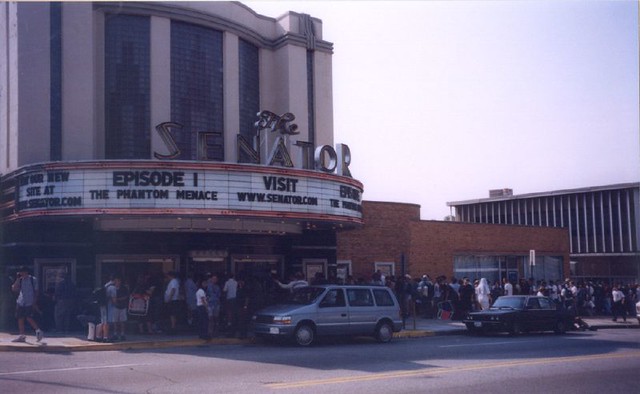 When the movie night came, the crowd burst into cheers of delight as the yellow text scrolled up the screen, laughed when Obi-Wan mumbled that he “had a bad feeling about this” and you could hear the intake of break as Qui-Gon introduced his Padawan to Anakin Skywalker – it was a thrill like nothing else. A new Star Wars movie!  We had waited so long…and that is about all I remember about the TPM premiere. 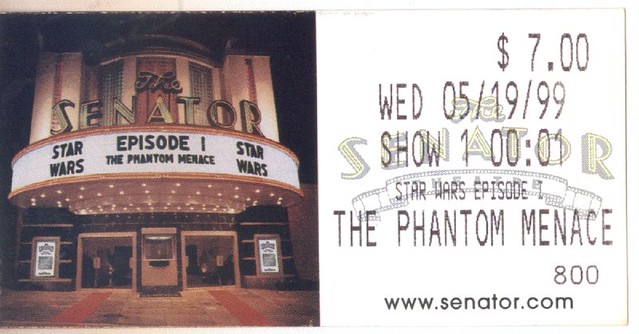 When “Revenge of the Sith” ticket sales were announced, thinking this would be the last Star Wars movie, I knew I had to get tickets. (I didn’t camp out for “Attack of the Clones” because Lucasfilm, in their wisdom, had the tickets go on sale while Celebration II was going on! My friend Paul stood in line for me, said that some guy took shots at them from his car, so he might not be as nostalgic about line standing as I am). The Senator still did not have online ticket sales in 2005 so I knew I had to camp out again. By this point, I had found a Star Wars club (DCSWCC) and had made friends with more awesome geeky people who were just as excited about the movie as me. Or maybe we were just excited about standing in line again? 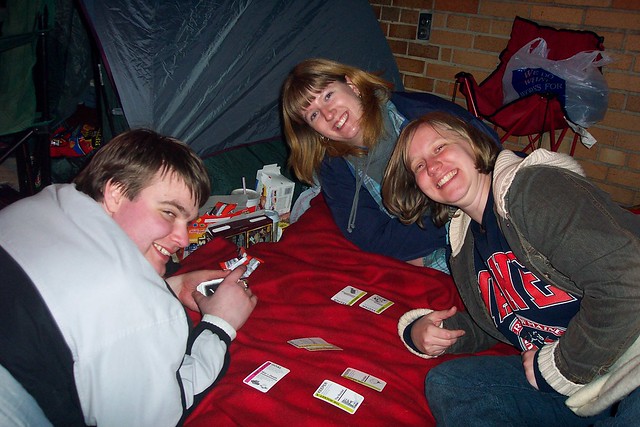 It was a miserable, cloudy day out but we came bundled up and sat on the cold sidewalk.  Then the most amazing thing happened – the theater owner, Thomas Kiefaber, took pity on us and let us all inside the theater! He had his Star Wars memorabilia out for us to look at and brought us all some snacks.  We all sat around in the theater lobby, talking about life, the universe, and everything. 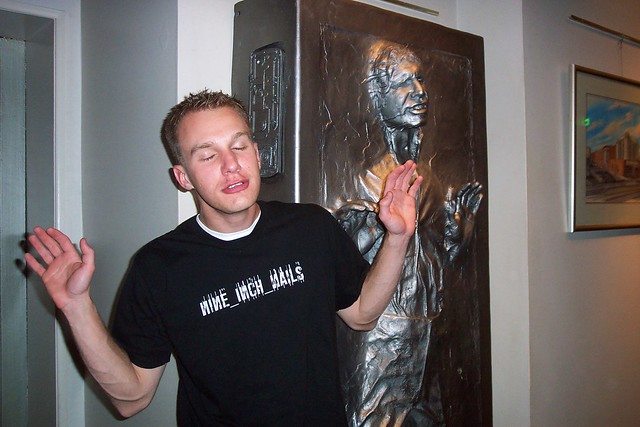 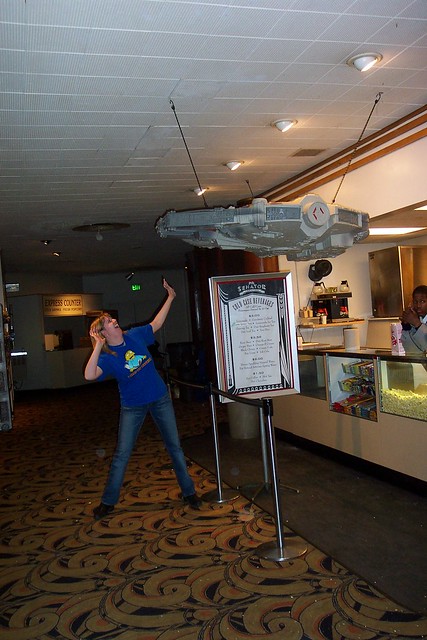 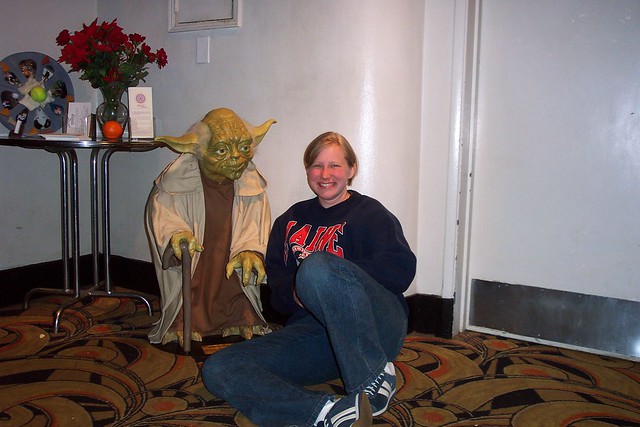 When the morning came, we all miraculously went outside and got back in line again (after eating bagels that Mr. Kiefaber brought for us from the local shop!) and bought our tickets for the midnight show. 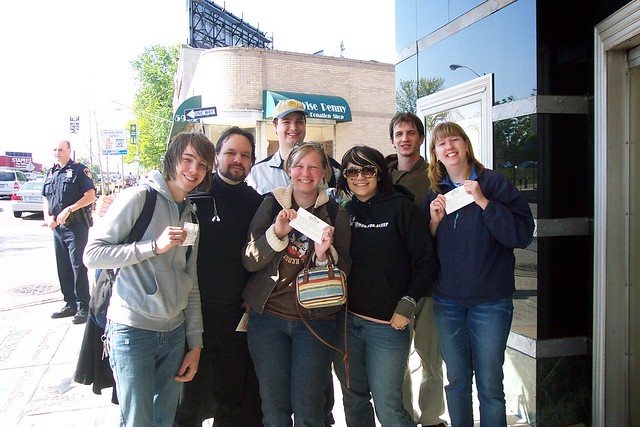 I don’t remember much about that actual premiere night. After the other two films, I think we all knew that this wasn’t going to end well but we knew that seeing it with 800 other fans would be better than seeing it in a mall multiplex.

Jump ahead 10 years later.  I was unsure about this new Star Wars movie. After the magic of seeing the prequels at The Senator wore off, I tired of them pretty quickly. I loved my original trilogy but was worried about what direction this new movie would take. I tried to stay cynical and distant. And then I watched the official trailer…and I was that 16 year old girl again, writing actor names on my notebook.

I ran upstairs and immediately went online to The Senator’s website and I snatched up two tickets for the 10:30 pm showing (apparently midnight showings have gone out of style?).  So no need to camp out in line, it was all about bandwidth. Still, I anticipated that I would need to get to the theater early to get the good seats.

I requested to leave work early on Thursday, December 17. My husband of three months agreed to come along with me. We ate dinner and got to the theater a little after 7pm. There was almost no line out front.  I think we were among the first ten (I was maybe a little anxious since one of my friends who attended the 7pm showing had arrived around 2pm). 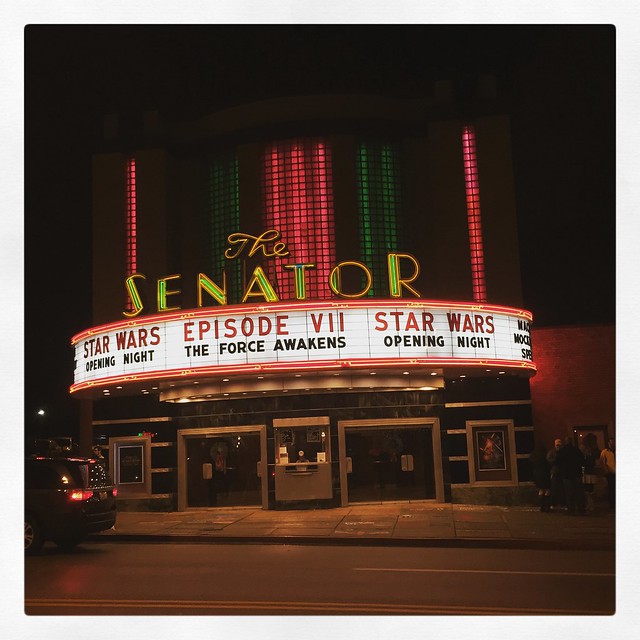 Of course, this is 2015 so we all had our smartphones. The group behind us was watching Robot Chicken Star Wars clips on YouTube. Would I get to enjoy the feeling of belonging one more time while waiting in line? I wasn’t so sure, then I started listening to the couple in front of us in line.  They were saying random names of actors and musicians. I couldn’t figure out the connection. Finally, I found a way in to their conversation when Jim Henson came up (I was in the middle of his biography so I was bursting with random facts) and discovered they were playing The Name Game. They invited me to join and a little after that, the person in front of them in line also started to play. Eventually we had a fun little group, including my friend who had seen the prequels with me back in the day. 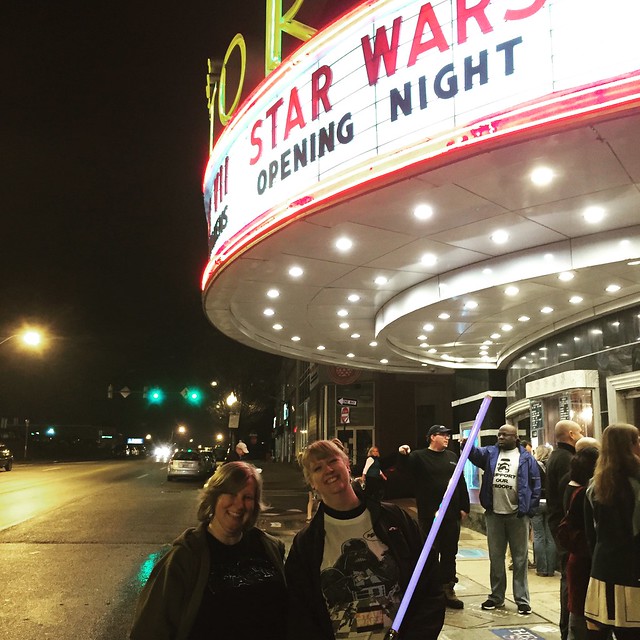 Around 9:15, the previous showing started to exit the theater and there was my brother and his girlfriend.  They came up to me and gave me their spoiler-free reactions and we talked for a bit.  After he left, my friend Steve and his wife appeared and gave me hugs and their quick reactions. Imagine trying to do that in a giant, 24 theater multiplex?  Yes, this was WHY I went to The Senator (and my brother too).

And then it was our turn to head inside.

I had fun with my single-serving friends and once inside the theater I never saw them again. We found our seats and listened to a local music teacher play Star Wars melodies on his keyboard while we got our popcorn. 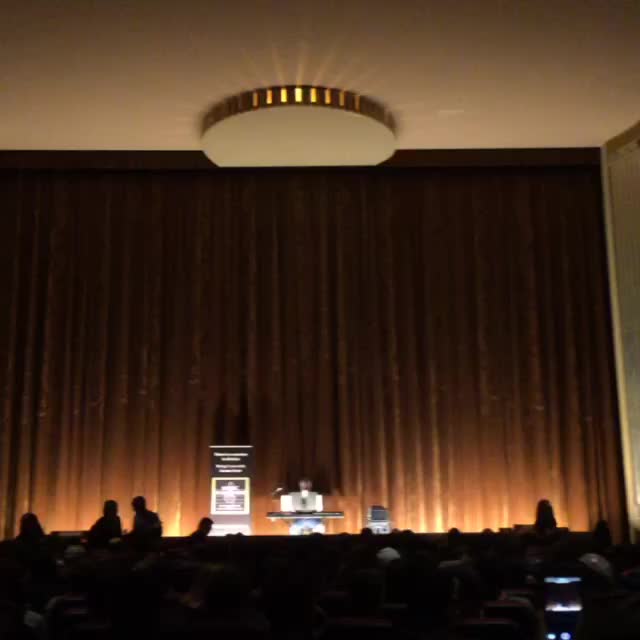 The new owners of the theater said a few words and then a single trailer ran (ONE trailer – I can’t imagine how many the people in regular theaters had to sit through).
And then silence. A black screen. The green letters begin to sparkle on the screen and there’s a smattering of applause. And then STAR WARS and cheers. And the magic was back. And we laughed together. We cheered together. We gasped together. It ended and we applauded.

I left the theater, giddy from the movie I watched but sad because I knew that was the last time this would happen.  The experience of camping out for tickets, standing in line to see a movie – it would be gone soon. It made me feel kind of special, and kind of sad because I think it was these experiences that made me into the passionate Star Wars fan that I am today. It was just about watching a movie, but seeing a movie with a room full of strangers who are, for those two hours, also your friends. Because you all love that silly little movie on the big screen, even if it was only for 160 minutes. 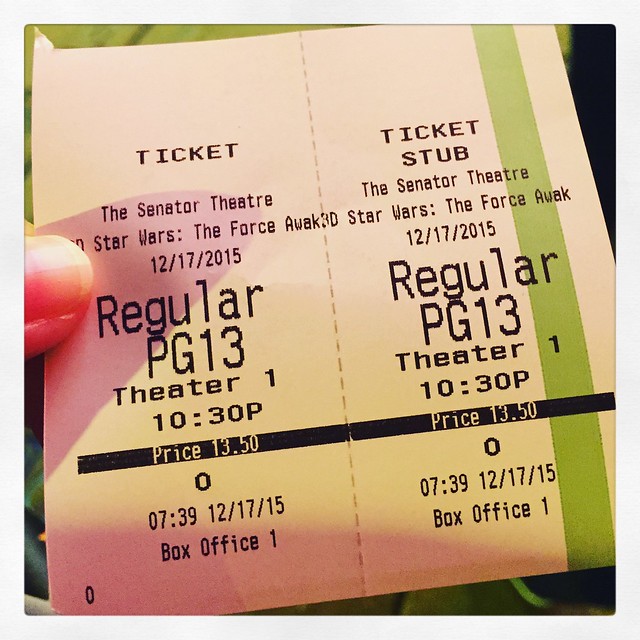