What to Watch: The Expanse (SyFy)

If you are like me, for the last 15 years (omg has it been that long?) you have had a sci-fi TV shaped hole in your viewing heart left there by the early cancellation of Firefly and (a few years later) the epic conclusion of Battlestar Galactica. I finally found a show to fill that spot in my heart and it is The Expanse. 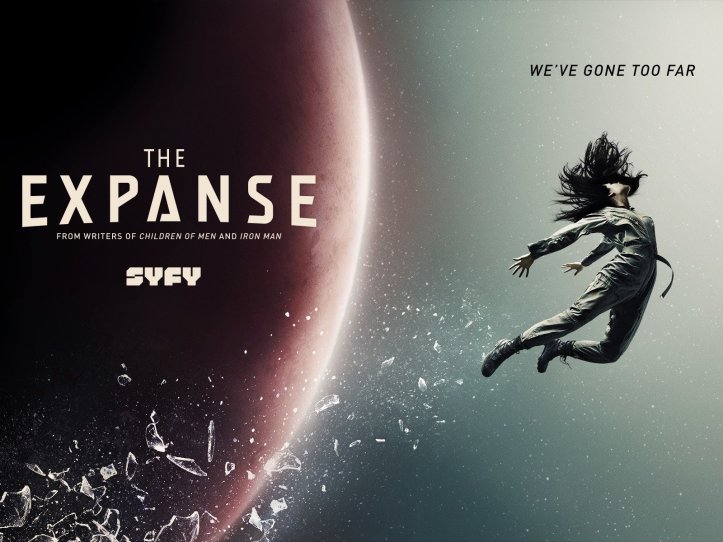 We’ve got our rag tag crew on the run, a grizzled cop looking for a mysterious woman, backstabbing politicians, and scientists playing god. And, bonus points, some kick-ass women in charge! Something for everyone!

Season 1 is currently streaming as part of Amazon Prime. I felt that Season 1 took awhile to find its footing, but do not give up. Think back to the first time reading/watching The Fellowship of the Ring and being introduced to so many new characters and realms and the rules that guide them – that is what slows down the first season. You have to learn about Earth and Mars and the Belters and their history. You have to understand the OPA and their agenda. And, of course, you must meet our would-be heroes and learn about their stories so you know it is okay to root for them.

But it is ALL worth it because when season 2 starts, there is nothing to hold the writers back. (Season 2 was just released on blu-ray/DVD; I managed to borrow a copy from my local library). The second season hits the ground running and never looks back so you better have paid attention during Season 1 (or be ready to rewatch it) because there is not time to stop and explain, the entire galaxy is on the line!

The show is based on a series of Science Fiction novels, tomes that same size as George R. R. Martin’s Song of Ice and Fire series, so there are plenty of characters and stories to choose from. While I haven’t read the books yet, talking to fans who have it sounds like the show writers are doing a great job blending together multiple story lines and introducing characters in a way that works better for a television show but stays true to the books.

I am excited to watch Season 3 in real time when it returns in 2018 so I can react to episodes and discuss the show with other fans. Until then, do yourself a favor and get your sci-fi geek on over the next few months (though I would say PACE YOURSELF because that Season 2 finale will leave you wanting more).

http://www.syfy.com/theexpanseThe Expanse – SyFy Official Website (careful of spoilers!)- Season 3 episodes will be available to stream after they begin to air. Currently only has the last few episodes of Season 2 available.

Season 2 is available on Blu-Ray/DVD so you can pick that up on Amazon as well or stop by your local public library!

I had forgotten about this pin the club put out in 2020 since I haven’t been to an in-person meeting in so long. We chose Leia because Carrie Fisher had recently passed when we planned it out (we vote as a club). The orange one was a surprise! I really need to get one of those fancy bags to start showing off my pins outside the house! #starwars #pins