Wow, I haven’t updated this blog since January! I may have too many blogs. 😛

I grabbed Witcher 3 during the Steam Summer Sale, it was $20 for the game + DLC so I jumped on it. I could have just played Tim’s copy, but that would require me to chase him away because Steam’s family share only works if the other person is not on their computer. So that was my excuse…I mean, to be honest, I am a nerd and I wanted to collect the Steam Trading Cards.

Well worth the money though, I’m loving it. I really liked Witcher 2 and I could feel myself becoming obsessed with the world (I even started to read the books) and Witcher 3 is everything and more and OMG SO PRETTY!

But I really love the characters. This is a STORY HEAVY game, even though there is plenty of action, adventure and exploration. I think Witcher has the edge on other games in this genre because of the novels and the very rich world that the game writers had to pull from. Compared to a series like Tomb Raider, let’s say, where Lara Croft is pretty much THE character and you know about her and everyone else is just set decoration. Witcher has characters all over the place, people with backstories that they are happy to share with you if that is your play style. (I can’t help but play Geralt as the badass with a heart of gold, sorry if it is cliche. Maybe the second time through I’ll be a dick to people and tell them to suck it up when they are crying to me about their dead wife).

I’ve logged 16 hours so far in the game, Tim completed the game and has 222 hours. So I have SO much game left to go through, so many stories. When the game starts, it seems like you can just go from point A to point B and complete the story. But riding around pays off. Yesterday, I was meandering around an area and I found an abandoned village full of ghouls. Geralt wiped them out and when he killed the last one, the townspeople returned and set up shop!

And not every quest ends in a battle. The quest I did last night, I had the option of fighting the monster or using the monster for a ritual to make it into a protective spirit. Of course, getting the monster to the right location took a little bit of fighting, but nothing too difficult for Geralt. After he did the ritual, I followed the creature to gather clues about the story. It is so satisfying to make a choice in the game and have it actually be a choice and not just a dialogue option that leads to the same outcome no matter what.

Most hilarious quest so far was going to find a villager’s goat that had wandered off. It liked a little bell, so Badass Geralt is walking around the woods, ringing a little bell. LOL. It was fantastic.

Anyway, I’m only 16 hours in so obviously I have barely scratched the surface, but if you are into games with great story (and you can put the difficulty all the way down to pretty much just play the story) watch for this to drop back down to $20 and grab it. So worth it.

Also, did I mention how pretty? (also, Geralt’s voice? Rawr. It’s probably the thing that worries me the most about the Netflix series. The voice actor for the game was so unique, how could I accept another voice?) 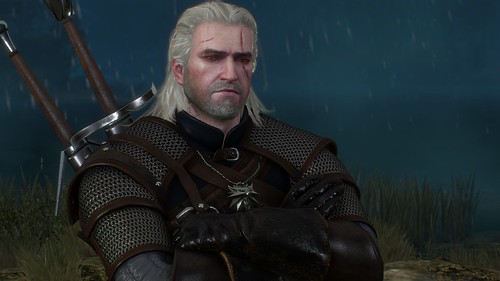 Bonus: I carried over my save from Witcher 2 and I never got around to getting Geralt’s tattoo removed after the “Hangover” style quest in that game so when I started up Witcher 3, there is was. **facepalm** sorry Geralt! Don’t drink so much next game!