month of me – college!

One of my livejournal friends asked me “What is your favorite memory from UMBC?”

Random fact about me – I have a crap memory. Like, I forget EVERYTHING unless it is somehow tied into a fandom, I swear it is embarrassing. Tim will remember lovely little relationship things and ask me if I remember them and I usually have to strain to think if I do.

ANYWAY, so what do I remember about college?

Well, I didn’t go away to school, I stayed at home and commuted. I was being frugal and I also wasn’t ready to be on my own and I knew it. The idea of having to do everything by myself did not sound like fun and having to share a room with a stranger? Yeah, no. I had my own room at home, my own computer, TV and parents that were happy to keep me. So I don’t have any wild nights at college stories.

That being said, I have two favorite things I remember from college. First, my radio show! Yes, UMBC had a radio station, WMBC, and the best thing about it was that it was streaming before streaming was a thing. Which was good because the radio signal itself did not go beyond the dining room that the station was situated next to. So I told all my IRL friends and online friends to tune in (this was pre-LJ for me, so online friends were AOL IM friends from high school and people I had met on Dave Matthews Band message boards).

I took an evening shift, I think it was 9pm on a Monday or something random like that, because it meant I could play whatever I wanted. It’s not like anything I was playing would be controversial, but it was probably too mundane for the afternoon crowd. Sometimes I would walk through the dining area and they would be blaring some heavy metal scream-o. And then I’d roll in at 9pm and the place would be empty and I would do a themed show that included The Beatles and up and coming artists like John Mayer before he was John Mayer. I was really into the “little guy” music scene but I was also into chill singer/songwriters and also a big fan of NPR’s Songs for Aging Children, which would always do shows where all the songs fit a theme.

One of my high school friends came by the station one night to hang out with me. He took these photos of me in the studio: 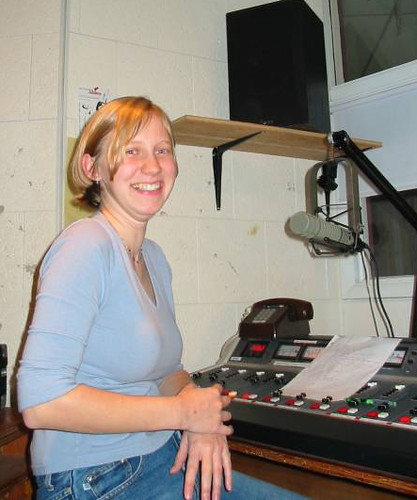 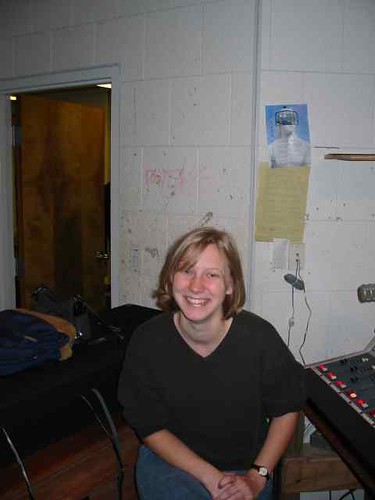 Damn, I was skinny!

My second favorite memory was finding out one of my professor’s new Joss Whedon back in the day and I got to do that six degrees of separation. He was my favorite professor too. Let me write a paper on how having shows like ‘Angel’ set in Los Angeles shows that American culture still sees the West as a wild and crazy place to set out and find your dreams, manifest destiny and what not.

Anyone else have any college memories they are brave enough to share? Comment here or post on your own blog if you plan to ramble on as long as I did and include photos! 😀