I FINALLY sat down and started rewatching Fraggle Rock this morning. I asked for the 35th Anniversary blu-rays for Christmas but just haven’t made the time. Since I’m all caught up on Queer Eye and Dark, I needed a breakfast show for my quiet mornings. I figured I would document the experience a bit to see how this show holds up so many years later. 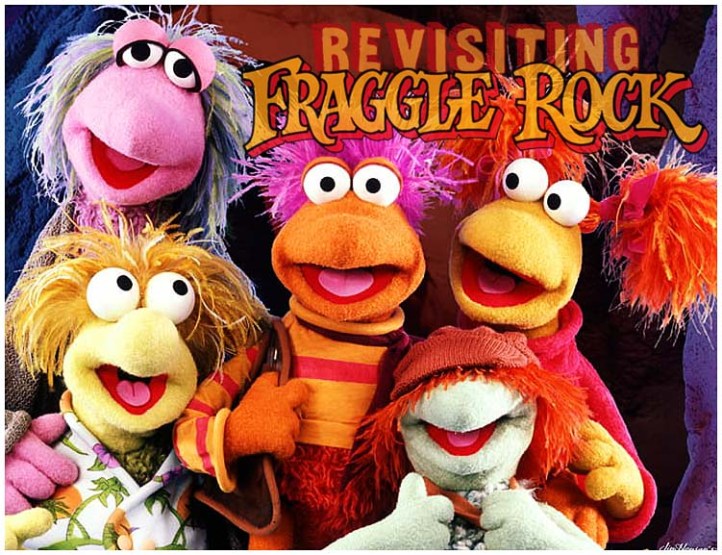 I mean, for me, Muppets are timeless. The Fraggles, in their underground world, are even more timeless because there is very little pop culture/style to give away that this show was filmed in the early 80s. Well, until we see Uncle Travelling Matt talk about the “silly creatures”.

The first episode is mostly setup. I was actually surprised that the first character we meet are the human Doc and his dog Sprocket. But it does establish that the show takes place in our world. Doc has decided to convert this room into a workshop and when he moves a box out of the way, it reveals a large hole in the wall. Moments later, Uncle Mat, who is out exploring the caves, finds the whole and discovers “Outer Space.”

I was surprised again that Uncle Travelling Matt was the first Fraggle we see too! He gives us a very “Concerning Hobbits” style voice over and explains who The Fraggles are as a people, complete with describing their dignity and grace as a species as we watch Red throw herself across the room on a rope swing and then Wembley trip over her a second later.

Mat also mentions that Fraggle Rock is the center of the universe. As a kid, this would just make you giggle, but as an adult, I can see the metaphor for Fraggles as humans at work. Because we do assume that our world, our lives, our struggles are the center of the universe. But really, the universe could care less and there is no center. But this is an interesting concept to introduce into a program meant for children because it creates an opportunity for families to talk about points of view and how our experiences shape how we interpret the world.

The only truly befuddling thing about Matt’s first adventure into Outer Space is that he instantly understands how the U.S. Postal Service works and mails Gobo a postcard via Doc’s address. 😛

I did like that Gobo struggles with his feelings about how to handle Matt’s request to venture into Outer Space to pick up the postcard. He asks Madam Trash Heap and she tells him the obvious thing – talk to your friends! It’s so SIMPLE but it is one of the things that doesn’t happen enough in shows. So often, the main character takes on the struggles alone. But that is not how Fraggles (or any of us) should face life. Gobo tells his friends, and while they don’t immediately believe him, they do come with him on his first adventure.

S1E2: Wembley and the Gorgs

Speaking of, I have now decided that anytime I get mail addressed to the wrong person sent to my house, it is clearly meant for some Fraggle.

Music is such an important part of this series. I love all the different styles and genres in the show. In just these first two episodes there were big group sing-alongs, an homage to “Jailhouse Rock” and then this sweet little rhyme.

At first, I thought this episode was just going to be about how Wembley doesn’t seem to have his own opinion of anything. Gobo has a whole conversation with him and Wembley just keeps agreeing or saying he will do whatever Gobo wants to do. Then Wembley gets captured by the Gorgs.

At first it looks like he will be kept as the Junior Gorg’s pet but Wembley’s constant flattery and agreeing quickly puts him on the good side of “The King of the Universe”. (Again, Traveling Mat told us that Fraggle Rock was the center of the universe, but the Gorgs clearly believe they are). The King and Queen Gorg feed Wembley and sing songs with him and Wembley is gracious and salutes and flatters everyone.

So when Gobo and the gang show up to rescue him, they are shocked that Wembley doesn’t seem to be in any kind of distress. Unfortunately, while they are talking with Wembley, Junior drops his Fraggle trap on them and catches them. When the King leans in to ask if they will be humble servants like Wembley, Gogo stabs him in the nose with his wooden sword.

Here is where the plot and moral of the story kind of shifted. Gobo reads the group Travelling Matt’s postcard while they are locked in the cage. Matt writes about seeing “flying creatures” that were tied with strings (kites and balloons). Mat tried to free the creatures and saw one set of them fly away (balloons) but the other creature immediately fell and waited for its master (the kite). Mat makes a comment about how differently they value freedom from Fraggles.

The next morning, Junior says he wants to “thump” the Fraggles but Wembley demands they receive a fair trial. Surprisingly, the King agrees. He asks Wembley if the Fraggles deserve to be thumped and Wembley gives a speech about the qualities that his friends have (“Boober knows special stuff that means a lot to him.”) Even more surprising, the King goes for it! He says he won’t thump them…just keep them as slaves. At this point, the Fraggles do finally manage to break free and run away.

In the final moments of the show, Wembley and Gobo are back in their home, getting ready for bed. Wembley apologizes to Gobo and says “It didn’t seem like I was a slave. I guess some slavery feels like freedom.” He also says that he didn’t realize what they (the Gorgs) were doing to him until they did it to his friends.

Yeah, that was NOT where I thought this episode was going.

In “Outer Space”, Doc cuts short his visit to the Tinkerer’s Convention because he realized that those people were not his friends and he wanted to be back home with his “real friend” Sprocket the Dog.

So I’m not quite sure what this episode was about? — slavery? friendship? Both? Relationships to other people?

Should I post my other Fraggle Rock thoughts here? Let me know if they are worth reading.